A question I get asked a lot by people is “What food do you miss the most from Australia?” They’re probably expecting an answer that has something to do with Vegemite or meat pies or avocados or kangaroos. But truthfully, what I really miss most is the ethnic food. One of the greatest things about Sydney is how multicultural it is, and all the amazing, authentic food that comes along with that. I get cravings for random things all the time… in fact I can give you a list of the top ten foods that I miss right off the top of my head:

Thai curry would make that list too, if only I didn’t have a life time supply of Marion’s Kitchen and other miscellaneous curry pastes in my pantry thanks to the black market curry smuggling operation I have going on.

And yes, there are versions of these things available in Korea (except Hainanese chicken and laksa . . . IF YOU’RE MALAYSIAN OR SINGAPOREAN AND YOU’RE READING THIS YOU NEED TO MOVE TO KOREA BECAUSE THERE IS A MASSIVE MARKET OPPORTUNITY HERE FOR YOUR DELICIOUS FOODS) but they all seem to be lame Koreanised imitations of the real thing and/or come with premium “foreign food” price tag. You can get a cheap kebab in Itaewon but it’s really just a glorified chicken salad wrap. You can also get delicious, authentic Turkish food but it’ll cost you more than 20 bucks for an iskender plate. I miss Auburn and Parramatta and Granville and Harris Park and Haymarket and Greenacre and Eastwood and Haberfield! I’m back in Sydney for a week in October, but that’s already more suburbs than days I will have to see them again!

So I’m always complaining, “Wah wah wah, this pho tastes like dishwater… whinge whine whinge, a pork roll without pate and pickled carrots is NOT A PORK ROLL, etc etc” And then one day, somebody tells me that there’s this magical place on the outskirts of Seoul called “Ansan.” The pho there is actually good, they tell me, and actually made and eaten by actual Vietnamese people. It’s the Cabramatta of Seoul. Where the bulk of Seoul’s migrant population live, work, and eat. Not only is there good Vietnamese food, but there’s also Chinese, Indian, Pakistani, Nepalese, Uzbek… it’s the most multicultural place you’ll find in this largely homogeneous country.

I made it my mission to visit as soon as I had the opportunity. It’s an hour away by subway which is a long way to travel for a bowl of pho, but I was quite confident that it was going to be worth it.

The “Multicultural Food Street” of Ansan is right opposite the station and stretches several blocks. We went on a Saturday night when the area is alive with hungry locals and curious visitors. We decided to walk around and explore for a little while before we sat down for dinner.

As I walk around, I start tripping out. are we still in Korea? Did the subway take us through a magic portal into a different universe? There are signs everywhere in languages that are NOT Korean OR English … OH MY G… IS THAT WHAT I THINK IT IS?! IS THAT A FREAKING BANH MI CART?!

At this point, Matt had to tell me to calm down and lower my voice. It looked like the cart had closed shop for the evening, but I vowed to be back again during lunch hours.

We walked down the main plaza and there were just ALL KINDS of street food that I had never even seen before. Signs we couldn’t read. Languages that I couldn’t even identify. Shop owners we couldn’t communicate with. Almost all traces of Korea had been taken over by foreigners.

“Excuse me, what is that big round thing?” 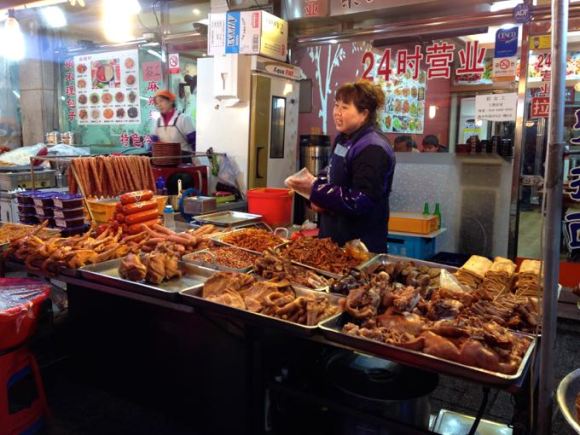 Even though we didn’t know what half the stuff was – it all looked delicious. I saw this lady’s spread of meats and got excited thinking it was Chinese BBQ, but on closer inspection it was mostly offal and offcuts. Not quite brave enough to try it, but still happy to see something completely different and exciting.

See the big red words that say “개고기”? That’s a sign for dog meat. You know you’re truly in the Korean ghetto when the local butchers specialise in dog meat!

Taking in the smell of all this unidentifiable ethnic food made us hungry. We walked over to a Vietnamese restaurant that a couple of Korea food blogs had recommended.

It’s called Dieu Hien Quan. I love that I have no idea how to pronounce that or what that means!

The place was covered with gorgeously tacky Chinese New Year decorations. There were a few other diners there, but none of them were Korean. And they were all eating fetal duck eggs! Which I had never seen in real life before! I felt like a foreigner in my own home country. It was great. 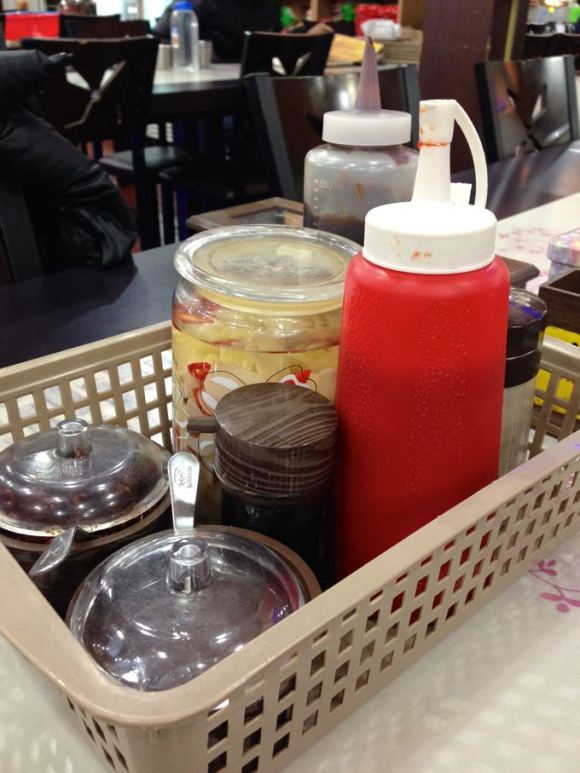 I don’t think I’ve ever been so happy to see a sauce caddy. Just like the ones back home… *sigh* 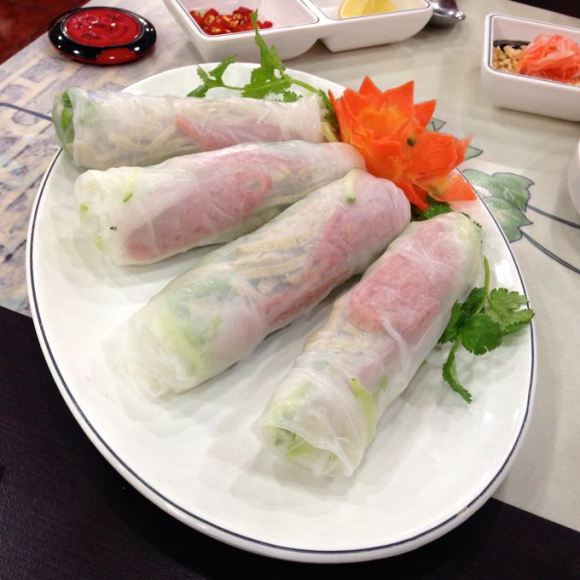 I wanted to order the deep fried spring rolls, but Matt’s on a ridiculous diet so we got the summer rolls instead.

It came out with some sexy looking sauce that bizarrely resembled the Aboriginal flag. 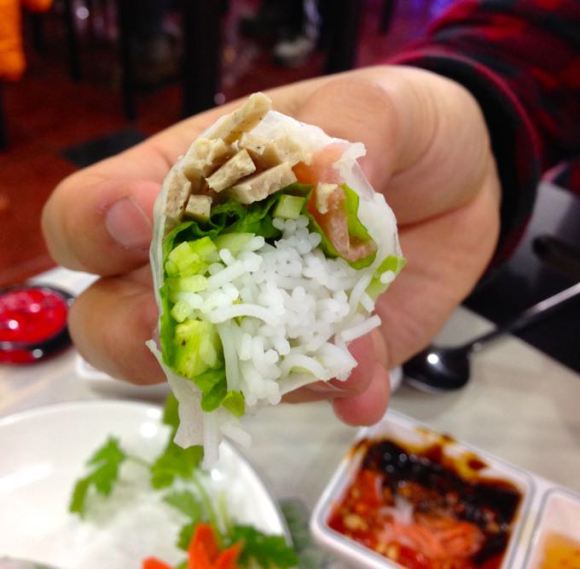 Really simple fresh rolls – mostly vermicelli with some greens and mystery meat. But tasted so good! Especially with the sauce. Fresh flavours and textures that are unmistakably Vietnamese. I missed you mystery meat!!

And now the moment I had been waiting for. One half of me bursting with anticipation, the other half trying to stay calm, knowing that almost all of the ethnic food I’d eaten in Korea had been a disappointment. 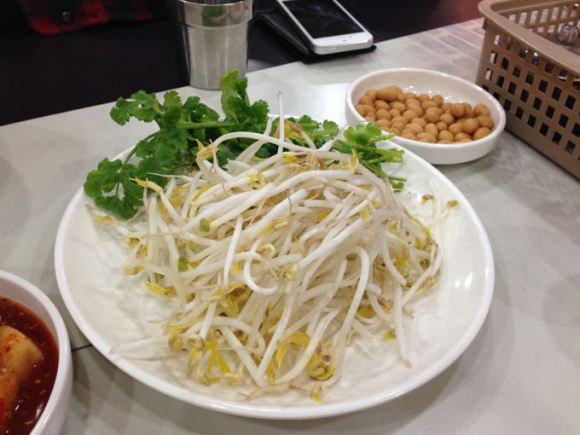 First the garnishes. There was plenty of coriander… but no Thai basil! Coriander is fine, but the pho I know and love is always served with Thai basil. Surely someone in Korea must grow it. Okay, this was slightly disappointing but it wasn’t the worst thing in the world. I still had high hopes for the soup.

I took a deep breath before my first spoonful and said something theatrical like, “Okay, here it is. The moment of truth.”

This is good pho. Not the BEST pho I’ve had, but it’s good. Really good. Needless to say, INFINITELY better than the el blando bowls of rice noodles they sell in Seoul. The broth is clean but full of flavour (I added some chopped birdseye chillis to mine for extra heat). Worth an hour on the subway? Definitely yes. 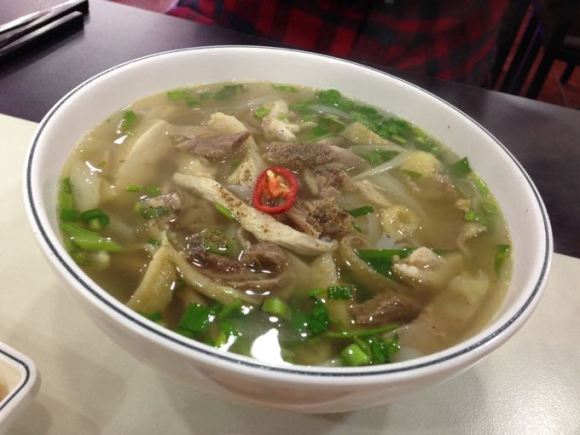 Matt had chicken pho. Pho is the only time our preferences switch and he always takes the chicken option while I take the beef option. I still don’t understand chicken pho… I feel like pho is in it’s essence a beef based dish. You can choose to have raw beef, beef brisket, or beef tripe, or any other part of the cow! But chicken? Seems wrong. Well, whatever, his life, his choices.

I just realised I didn’t take note of the price. How very unlike me!! That just means it wasn’t cheap enough to excite me, but it wasn’t expensive enough to outrage me. I’m guessing each bowl was around the 8,000-9,000 mark? Seems about right.

Once we we were done, we decided to hit the streets for some dessert.

I like my dessert savoury, and these big pastries with specks of green were catching my eye. But then I spotted the rolls in the corner that looked like they were filled with chives and possibly, scrambled egg? SOLD.

Doesn’t look like much but gosh…. this little thing was SO DAMN GOOD. Something about that salty egg and galicky chive combo… one of the best street snacks I’ve had in Korea! And it’s not even Korean! Google tells me that it’s Chinese and called Jiu Cai He Zi. Jiu Cai He Zi, I’m in love with you, and I will come back for more of you.

Ansan is an adventure. There’s a lot to explore and try, much of it unfamiliar, some of it even a bit scary. It’s like nothing you’ll find anywhere else in Seoul; it is the anti-Itaewon. Just pack a good book and take line 4 all the way down. I’ll be back soon for banh mi, more Jiu Cai He Zi and a Pakistani restaurant a friend recommended. And then I’m going to find a pho place that has Thai basil and actually try that big pancakey thing. This may turn into an Ansan food blog, just warning you. 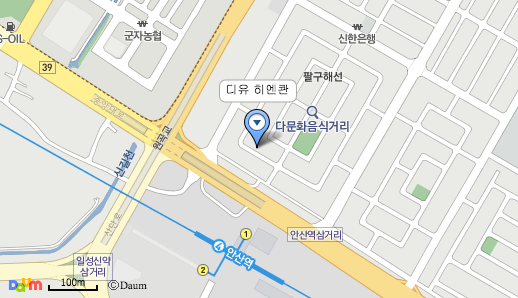